This summer was a great season for Romanian craft beer, one that saw numerous new breweries opening up, existing breweries taking big steps forward and more than a few beer soaked events.

There’s a lot to look forward to as well, and projects are being worked on across the country. So, grab a beer and let’s see what happened in the world of Romanian craft beer this summer.

Hot sun and a cold beer go hand in hand, that much is known. So given the fact that this was a pretty hot and dry summer,  it comes as no surprise to hear that the good people of the world lined up several events for beer lovers. You know, just to keep us hydrated.

Beer festivals, the perfect place to meet the brewers of your favourite beers (with Matei from Lapusna and Ionut from 1717)

The Bucharest Craft Beer Festival returned for a second outing this June, with three beery days. The lineup itself showed just how many new names have been added to the list in the span of just one year, such as Hop Hooligans, 1717 and Bereta, on top of brewers that have been around for some time yet didn’t join the show in the previous edition, such as Bere Cazino, and Bere a la Cluj.

Decent weather, delightful street food, live music and spectacular beer were the key ingredients that made it a weekend to remember. Several brand new beers made their way onto the scene right in time for the festival, including the Bereta/Hop Hooligans collaboration, Nut Busters.

The craft beer movement may have set sail towards bright horizons, however it still needs a command center to ensure a smooth journey. So obviously, the launch of the Romania craft brewers association called for a celebration, and what better way to do so than organizing yet another beer bonanza. The Xtraordinary Craft Beer Party in Bucharest showcased beers from not only the founding members of the association (Ground Zero, Hop Hooligans, Sikaru, Perfektum, and Zaganu), but also numerous beers from breweries around the country, such as the second beer released by Wicked Barrel  – Jaw Drop IPA. We’re hoping to see great things achieved by the organization, such as a centralized distribution center and the smoothing out of many other logistic and bureaucratic details, which will aid not just the industry itself, but beer lovers as well. 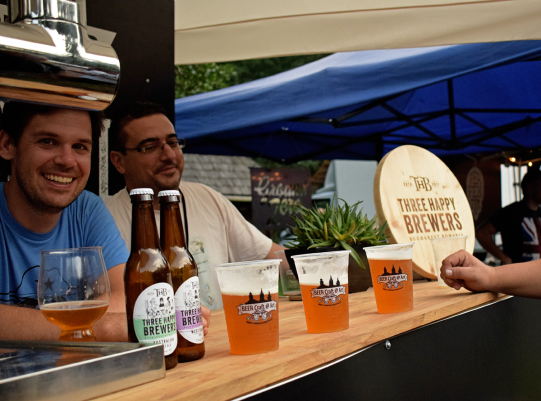 David holding the fort at the Three Happy Brewers stand

In August, Eco Zen Boutique in Sibiu felt it was time for Bucharest to stop hogging all the excitement and brought the party up north, for the first festival of this sort to take place in Transylvania. While the setup might have been smaller, the two day lineup was sure to deliver, bringing in several new additions to the game. Three Happy Brewers and Amsitad were among some of the newest breweries there showcasing their wares, and we were also pleased to see Lapusna join in the general festival fun, even if it was for just one day.

Besides festivals, there have been a huge number of craft beer related events all over the country. The new Ground Zero Bar showcasing their latest experimental beers has become quite a bit of a staple on the Bucharest beer scene, while food and beer pairing evenings and beer tastings are becoming regular occurrences in bars and restaurants in many Romanian cities.

There’s no doubt that Romanian craft beer is growing rapidly. At the time of writing, there are 26 craft breweries/brewpubs and cider producers actively crafting and selling their goods. And just wait until you see the new brewers to come out and try their hands at manning the mash tuns this autumn!

Existing breweries are also expanding their reach as they become available outside bars, pubs and specialized beer shops. Retail stores across the country are seeing Harvester and Clarks nudging in and claiming space on the cider shelves, while Sara, Sikaru, Clinica de Bere, Zaganu and Nemteana have already become familiar faces in the large supermarkets.

More and more breweries have also started kegging their beers, creating a more affordable, and some may argue, superior beer. Even some of the smallest breweries in terms of output have moved on to kegging, such as Bereta and Hophead. On the other hand, the Klausen Burger brew pub in Cluj Napoca have just started to bottle their beers, making them more readily available around the country.

There are now more places than ever to find Romanian craft beer, with more to come soon. Numerous bars have taken the move to stock craft beer by the bottle, and on tap, all around the country. Bottle shops and growler fill stations are becoming more common as well, such as Beer’s Point in Cluj Napoca, and Statia RomBeer soon to open in Bucharest.

Over the last few weeks, we’ve seen the emergence of a small number of craft beer bars, dedicated to selling the freshest Romanian artisan beer.

The Ground Zero Bar showcases all the latest brews by the lads at Ground Zero, including a number of experimental ales. They recently introduced the first craft nitro stout to the market, which is another great step forward for Romanian craft beer. The bar has six of their beers on tap, ranging from classics such as Morning Glory, to the newest concoction to have made it inside the keg.

Zaganu have also been making huge steps forward, and have recently opened their own Romanian Craft Beer Bar in Bucharest. With 10 beers on tap, including their entire range and numerous other Romanian craft beers as guest appearances, as well as a huge variety of bottles, it’s worth heading down there and grabbing a beer flight, a hot dog and a few bottles to take home! 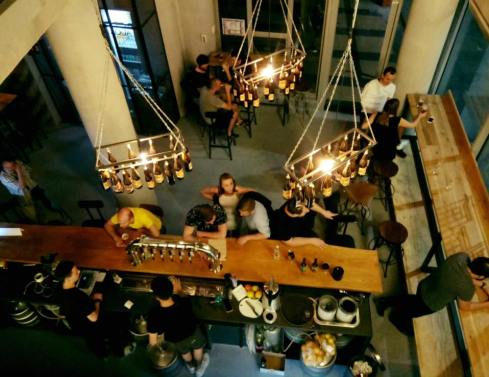 Finally, it’s worth taking a look at the latest Romanian craft beers to hit the shelves – get them while you can!

August also saw the opening of the Podu’ Cu Lanturi brewpub in Bacau which, on top of their current range of 3 beers, also offers restaurant and hotel facilities, and a complementary medieval castle setting.

Speaking of hop harvests, Wicked Barrel have been productive and recently harvested their homegrown Centennial and Chinook hops in Bicaz. While some may argue that terroir plays its part in the outcome of the crops, we’re sure those lovely green cones will deliver the lupulin and alpha acids that are expected of them, and we’re hoping to see them make an appearance in their beers one day.

We also heard a couple of rumors about some fruity numbers in the making, such as Hop Hooligans messing around with all sorts of scary berries (when they’re not busy dry hopping Shock Therapy with every conceivable hop combination), and Hophead looking to bring back an old favorite in the coming weeks.

As for events to look out for, check out the following:

Finally, here at Beerologique, we’ve started our own small events in Cluj Napoca, in collaboration with Off the Wall, Canadian Bistro. Our Meet the Brewer series allows you to get to know the brewers behind your favourite beers, with a pint or two to help the discussion along. While beer tastings are all fun and games, and everyone loves tasting notes, we believe it’s equally important to meet the actual people behind the whole operation, understand not just how beer is made, but what makes the brewers tick and strive to deliver a quality product.

The first event introduced the lads from Bereta to the unsuspecting denizens of Cluj. The offerings brought forth were two kegs of ‘Ai Pi Iei (which the crowds were quick to work their way through), as well as a special treat: some of the last bottles of the 5 month matured Black Pot. The informal evening touched upon topics ranging from what it means to be a gypsy brewer, to why craft beer has the audacity to not cost 6 lei per bottle. All in all, it was a good laugh, and we’re hoping to have shed some light on the inner workings of the industry, and the brilliant minds making it happen.

How to get anyone’s attention: mention beer, and let the discussion flow from there.            Cheers Adi and Silviu!

Our next event is with the team behind Hophead Brewing, Darko and Dana Jovik, and will take place at Off the Wall on Sunday 17th September, from 5pm. See you there!

So, while it’s been an incredible summer for Romanian craft beer, hold tight. The year isn’t over yet and there’s plenty more to look forward to, including the arrival of several new breweries, many of which have already got their first batches quietly maturing away.

More on that coming soon, noroc!

One thought on “The Hop Harvest – A Summer Summary”