Well, it’s been a long time since we wrote a blog post here at Beerologique, but we have a good excuse! With summer well and truly setting in, we decided now was a good time to do some vital global research. As a result, we’ve been away for the last month sampling beers old and new from the UK, Germany, Poland and of course, Romania. It was hard work – certainly not a holiday- but we felt someone had to do it!

A month away is a fairly long time, especially when the craft beer revolution here in Romania moves at such a fast pace. We’ve spent days looking over what the various breweries have been up to, as well as what’s new. It seems we missed a lot while we were gone!

What’s new and up and coming?

Well well well, we’ve returned to find that Three Happy Brewers have opened up a brewery and beer garden in Bucharest. Appearing seemingly from out of nowhere at the beginning of June, they quickly set up shop and have already released three beers that we know about. Their beer garden is open Wednesday – Friday 17:00 – 23:00 and Saturday and Sunday 12:00 – 23:00. So, if you’re local, get down there and let us know what you think! More information about the brewery can be found on our page, here.

We’ve also heard news that Capra Noastra in Iasi and Amistad Beer in Bucharest, will soon release their grand opening dates. If you’d like to get an order in with Capra Noastra, just send them an email at ionel@capranoastra.ro. Check out our Capra Noastra page for more information and a list of their products.

The tasting bar at Oriel Brewery

Also in Bucharest, we’ve seen that Oriel Beer have been busy behind closed doors. They’ve been putting the finishing touches to the brewery and the tasting bar, and it’s looking great!

I was fortunate enough to visit the Bucharest craft beer festival in June, and was able to sample some of the newest beers fresh from the source. Since we’ve been away, these have made their way across the country and most are available online at Berero.

As usual the lads at Hop Hooligans have been busy creating some fantastic new beers and they certainly haven’t slowed the pace down. Most recently they’ve released;

Get them while you can! Coming soon, they’ve gone for something a little different, with Sencha; a Japanese tea pale ale.

They’ve also made an appearance on The Master of Hoppets recently, a well known beer reviewing duo. Check out the video here to see how they did!

The guys at Ground Zero have released a new range of beers for your enjoyment. The Deranj line currently consists of;

The latest offering from 1717 is their spectacular Weiß Plus. Making its debut on tap at the craft beer festival, you can now find it by the bottle in various bars, restaurants and shops around Sibiu and Cluj Napoca. Also, check out their Facebook shop.

Besides the fantastic Nutbusters they brewed with Hop Hooligans, the boys from Bereta have recently released Milk the Fruits: Apricots. This is the first of a series they plan to release shortly and was brewed in collaboration with Berero to celebrate two years of activity.

There are few things better in this life than enjoying a cold glass of high quality craft beer in the sun and this is becoming increasingly possible throughout Romania as the years go by! Indeed, we’re seeing new breweries springing up regularly, while those already established grow and expand.

As example, Hophead and 1717 are now kegging their beers, which is a great step forward for the breweries and the consumer. Other breweries are expanding their range, while some are increasing their output. Having sampled many beers from around the world (purely research!) in the last month, we can honestly say that Romanian craft breweries are well and truly stepping up their game, and producing some beers that fit comfortably on the world stage.

Oh, and for anyone who’s worried that the big breweries, such as Heineken, will crush the craft breweries, we’ve seen evidence that this is not the case. While in Poland – a country that has gone from four micro breweries to almost 100 in less than five years – we were perusing the shelves for craft beer, when we came across the following; 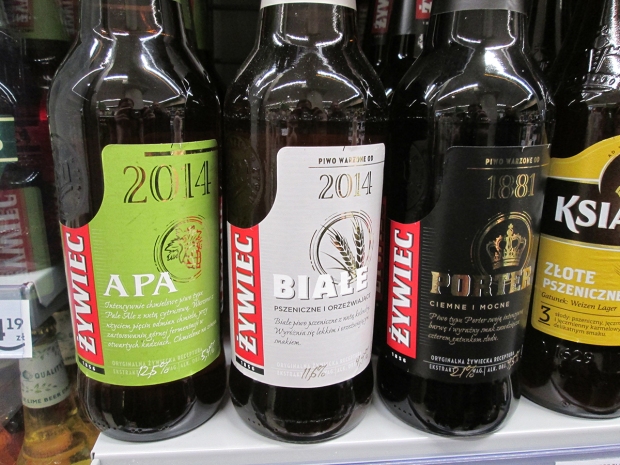 Look familiar? Zywiec are an old Polish brewery that were taken over by Heineken several years back. In response to the emergence of Polish craft beer, they, and several other big breweries released craft quality lines, similar to our own RPA from Silva! Despite all of this, the Polish craft beer scene is thriving, with more and more breweries cropping up each year.

So let’s not worry too much about the big boys, and just enjoy what the craft brewers are creating for us!

Check back soon for more updates, and if we’ve missed anything, please let us know in the comments below!