For the longest time, cider was a very unfamiliar kettle of fish to the Romanian populace. If you told someone how to make cider, chances were they would turn up their noses and claim that’s a very sound recipe for vinegar. Which, in all fairness, is not entirely false. However, with macro owned manufacturers making an appearance on the market as early as 2014, it was not before long that people started exploring other avenues aside from their regular beer drinking.

For Alan, this wasn’t enough. Having lived in Romania since 2001, the Scotsman decided that his adoptive peoples deserved a proper treat, in the shape of artisan cider. After several years during which he used the produce of his own orchard to make cider for his friends and family, Alan and his team started prospecting the market in 2012. Back in those days, cider was such a novel concept that the authorities weren’t even agreed on how to tax it, however, three years and much red tape later, he opened his cidery (or cidrărie, as he fondly calls it) in 2015.

Officially the first real cider producer in the country, made from 100% Romanian apples, Clarks have delivered us a fantastic product, one that was long overdue an acquaintance with the Romanian crowd. They have a selection of ciders to please every palate, from dry to sweet and all the semis in between, as well as seasonal varieties available, which are a delight to the taste buds. Given the nature of the apples and the fact that some years fare better in terms of crops than others (with 2014 being a notable example), the types of apples used may vary from batch to batch, and year to year. So while the original plan was to use his own orchard for the apples, over time they started collaborating with other local apple growers to meet the demand.

Clarks can be found mostly in Bucharest, but also online at Berero Store. Available by the bottle and on draft in certain bars in Bucharest, they have also started making their way across the country last year, both in supermarkets as well as at craft beer festivals.

And while you’re on our page and proficient in the elusive Rom-English language, do have a wee scroll down and read through some of their promotional material, as it’s guaranteed to induce quite a fair bit of chuckling!

For reviews check Untappd and RateBeer. 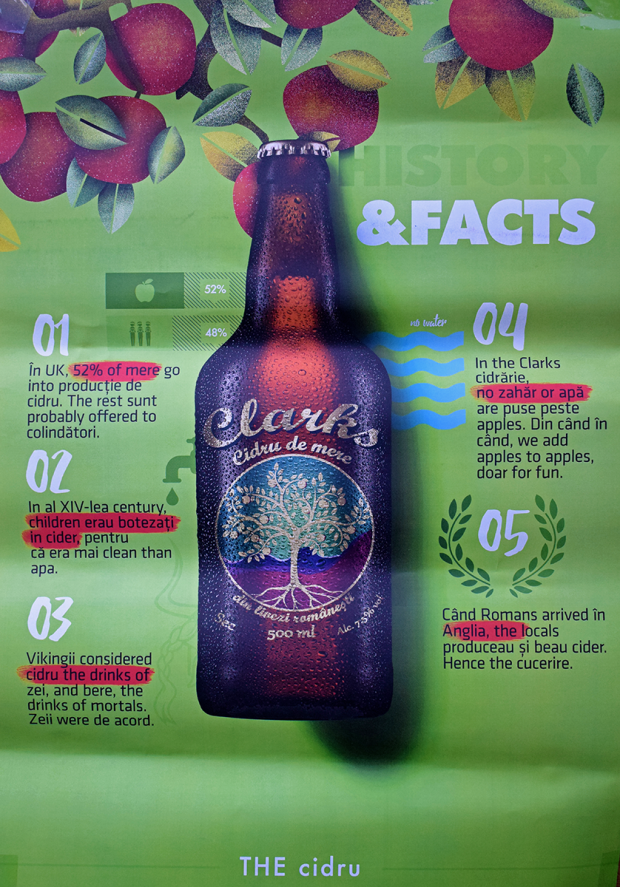