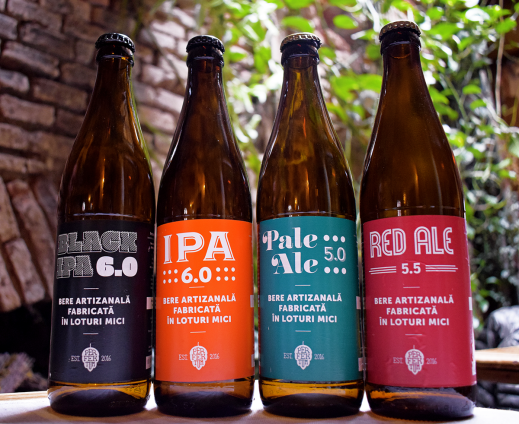 Craft beer does not take kindly to compromise, and this was precisely what the founders of Perfektum kept in mind when they started brewing.

After about 6 years of homebrewing for friends and enjoying their feedback, in 2014, they began contemplating opening a proper business. So after a bit of research, they finally decided on an abandoned woodworking facility, which they turned around and quickly turned into a brand new brewery.  In fact, their dedication to the project was so thorough, that when they couldn’t find the funding for various pieces of equipment they needed, they simply hired local contractors and made their own.

Having Laurențiu on the team was an added bonus, as he is the owner of the homebrew supply shop Fabrica de Bere, a shop which also supplies local craft breweries as and when needed. So with a steady supply of German malts, as well as high quality hops and yeast, it was only natural that this recipe for success would result in some memorable beers.

In spite of increasing their production in 2018, with new fermenting vessels and equipment, their beers were still made in small, hand crafted batches. And because their dedication to brewing a high quality product extends to more than just their beers, they also became one of the 5 founding members of the Craft Beer Producers’ Association.

The following years, Perfektum spent their time diversifying their range, as well as making regular appearances at festivals, creating educational and informative blog posts, as well as trying to get their beers out to as many craft lovers as they could.

The COVID-19 pandemic put a spanner in the works for the guys, with the difficulties caused by lockdown, bars closing and reduced sales volumes taking their toll. As a result, they announced on October 19 2020 that their brewery will be closing, after almost 5 years since the project officially began. Perfektum became the second Romanian craft brewery to close down.