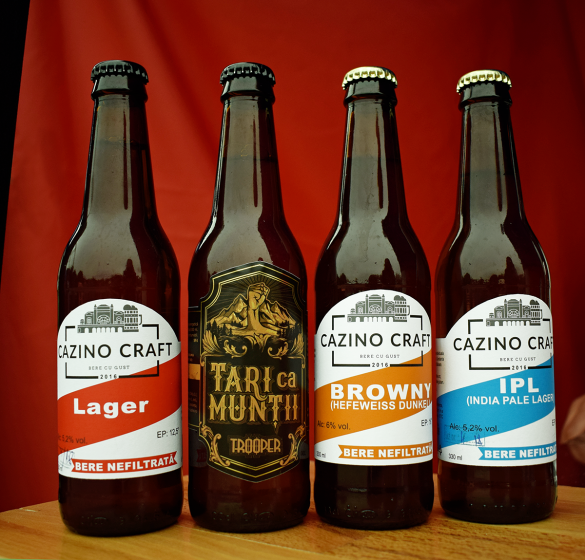 Named after the iconic casino building in Constanța, Bere Cazino started producing beer commercially in June 2016. With over 20 years of experience in the brewing field, and after working in a Romania based Heineken subsidiary, the head brewer set off with one mission: to produce a beer that would make its way to its consumers within 24 hours after leaving their premises.

The story of the brewery goes back to 1992, when Radu decided to bring his brewing passion to fruition and open up a 200 hectoliters/year operation. Things went well for a while, yet with the emergence of macro breweries on the market in 1997, they were soon forced to shut down, and Radu went back to working for Heineken. It wasn’t until his retirement that he began to contemplate returning to his brewing days, and after 5 years of tinkering, him and his family decided to reinvent an old, local brand, and give Constanța the brewing tradition it was so thoroughly missing.

The brewery specializes in traditional lagers, with an ABV of around 5.2% – 6%, fermented for at least 21 days. It is worth mentioning that the head brewer has a different approach to beer, and while all of the beers presented in this database are unpasteurized and unfiltered, his fall in a special category. Which is only fair, after all, someone with so much brewing expertise can venture into all manner of experiments, such as using baked malts (instead of roasted) to give their beers colour, or using a rather unorthodox setup that mixes bits and bobs collected over a 20 years span.

Due to the old school bottling techniques, the brewer recommends that the beer is drank fresh, and that special attention must be paid to the ‘best before’ dates on the label, as the beer will only reveal its true flavor and potential within a maximum of 9 days after being bottled.

In December 2017, Cazino also joined in the national trend of brewing beer for Romanian bands, and are currently producing the ‘Tari Ca Munții’ (Strong Like the Mountains) beer for the band Trooper.

July 2019 brought interesting developments for the brewery, as they decided to package their iconic lager in 1 litre PET bottles. This decision came as a result of their selling point in Piața Tomis 13 closing, which, for many years, was a place for locals to take their beer home in growler form. It is, however, worth mentioning that you will still only find the 1 litre bottles just at the Piața Tomis 13 location, which they are still affiliated with. Beers bottled this way are filled at the brewery, and are best drunk within 48 hours – also a nice way to tip into a more traditional way of packaging, as far as the local market goes.

Although predominantly available around their native city of Constanța, you can find them in several locations in the area, as well as The Beer Institute in Bucharest.