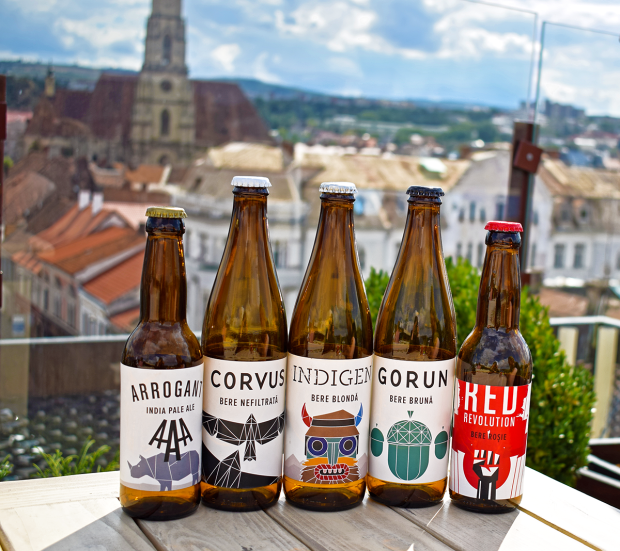 This sky bar come restaurant in the heart of Cluj Napoca was one of the first producers of craft beer in the country. In fact, it was a mere matter of bureaucracy and obtaining authorizations which held them back from taking the crown of the first artisan brewery in Romania, a title claimed by Clinica de Bere.

The name of the brewery is a clever word pun based on the German name for the city of Cluj, Klausenburg, as well as the brewpub’s signature burger dishes.

The brewpub restaurant comes with an outstanding view over the city of Cluj, and the roof top terrace on a warm evening is an excellent place to relax with a cold beer. Should the weather not allow for an outdoor beer tasting, the inside of the brewpub is also very welcoming, and it also lets you take a sneak peak at the brewery itself, visible through glass panel walls. Aside from their own range of beers, they also serve a mixed menu of excellent food – their burgers pair perfectly with their IPA.

2019 marked an interesting time of growth for them, as they started branching out from their core range of traditional styles, and venturing into the realms of American Pale Ales and DIPAs, to suit the tastes of the modern beer drinker. This switch to the modern has also been reflected in their use of hops, and in 2019 they even started using hop pellets, after predominantly favouring whole hops.

For many years, their beers were only available on site, yet as of 2018, their bottles have become easily available across the country, with pasteurized versions making it on the supermarket shelves as well. And with a kegging facility up and ready, they’ve also started making their debut at craft beer festivals as of May 2018. However, for a fully immersive experience, we recommend trying their beers at the source, in their Cluj-Napoca brewpub.

For reviews check RateBeer and Untappd.